issues with arcing in the formation process

UK Powertech, Digatron and ESPL have carried out 2 years of research and development, and engaged in field trials with 5 international battery manufacturers.

We examined current shop floor practices in formation and the effect of increasing current densities to reduce formation times. The findings showed that factories were losing hundreds of thousands of USD per annum.

Annual savings of ½ million USD in formation energy consumption, for a 5 million battery output, have been reported by one of the factories taking part in the field trials.

This work led to a new connector design, formation rectifier modifications and new maintenance procedures. All of which, drastically reduce process costs.

We found that there were problems of increasing battery and connector damage in many of our  clients’ formation departments.

It was also apparent that Incidence of problems such as arcing between the connector and battery terminal had also increased over the last few years. This coincided with the reduction of formation times and therefore higher formation currents used by clients.
Start of programme

After identifying these problems, the next stage was to visit some of the clients who had experienced high incidents of arcing to establish what formation schedules and working practices they were following. We were granted access to the departments and were able to observe several aspects of the process. These were:


From these initial visits, It was evident that there was difficulty in properly fixing connectors to the batteries whilst they were moving. The sheer number of operations performed and the stretching required to reach the batteries, would inevitably cause some operator fatigue, particularly towards the end of the shift.

This could result in connectors being loosely placed on the terminals which could create an electrical arc (sparking).
The findings 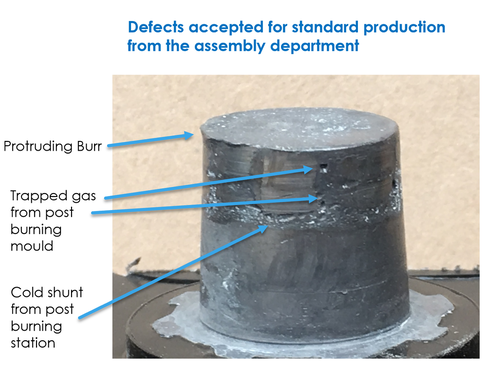 There were a few factors which contributed to badly fitting connectors and high resistance joints:​
​ 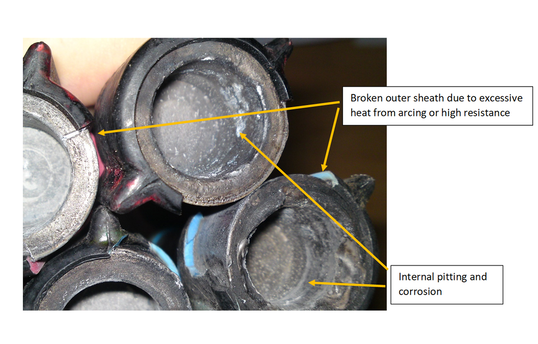 These defects prevent the connectors from fitting properly onto the terminals. Loosely fitting terminals can create electrical arcs or sparks between the battery terminal post and the connector when on charge. The higher the current and the more loose the connection the greater the arc damage.

​​​Most of the connectors examined during the trials had clearly suffered from minor arcing damage, most of which would go unnoticed on the battery terminal so no action would be taken. 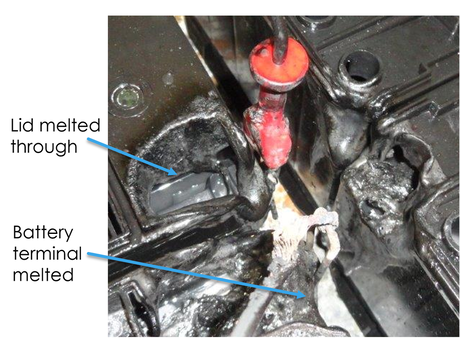 ​
The connectors however, will gradually deteriorate, leading to early failure and a high resistance surface with pitting from the electrical arcs and a corrosion layer from the acid exposure.

​This means that the connector resistance increases rapidly with use and in a short period becomes unusable as well as having a greater risk of creating a dangerous spark from arcing which could result in a catastrophic situation including a serious fire.
​The problem of arcing caused by badly fitting connectors is shown in diagram below which compares a standard TS connector and UK Powertech’s new TSC design. 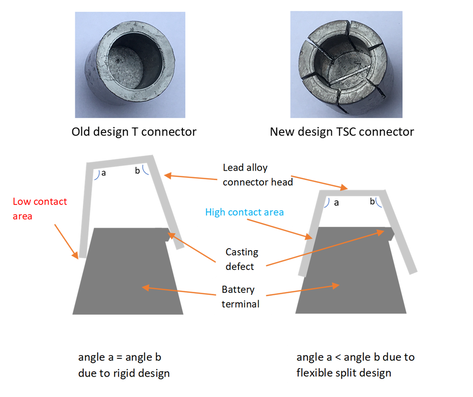 ​The TS design is rigid lead alloy bell end which is designed to be a snug fit on a standard connector. If there is even a small defect on the terminal casting then this prevents the connector head from being properly seated.

​The result is a point contact which may also be loose. This is a classic condition where a spark or electrical arc may be generated, causing terminal and battery damage. The new TSC design is able to accommodate the normal casting defects commonly resulting from the assembly process. As can be seen, the TSC design has 6 segments. If 1 or 2 segments are displaced due to a raised defect, the other segments can still make good contact with the terminal which eliminates the chances of an electrical arc occurring.
There are 4 features to be aware of:
​​ 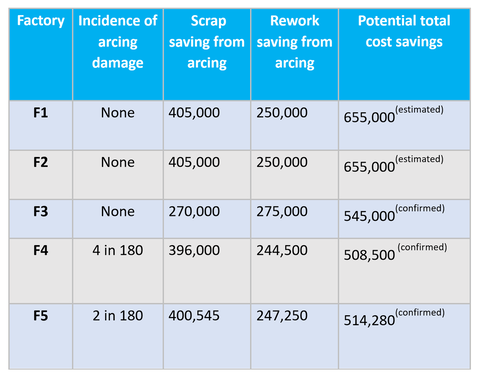 ​The findings and the financial savings for a 5 million battery per annum factory are shown in the table. In these cases, it ranges from 508,000 to 655,000 USD per year.
© UK Powertech Ltd. All rights reserved.